Thanks to a lot of good contributions, I’m pleased to announce the availability of ObjectivEClipse 0.2, which allows Objective-C code to be written/compiled inside the Eclipse CDT environment on the Mac.

This version depends on CDT 6.0 and Eclipse 3.5, which are part of Galileo. If you’ve already got a 3.5 install, you can use the update manager to find and install CDT, or you can download a pre-canned Eclipse CDT package with all the Mylyn goodness built in.

So, what’s new with ObjectivEClipse 0.2? Well, we’ve had many good contributions, not the least of which is a parser which is less brain-dead than the one I originally hacked together; so we can now parse interfaces, field definitions, methods (both interface and implementation) and, thanks to built-in CDT support for such things, use code folding and Mylyn. The net effect of all this is it’s really starting to feel like an editor that isn’t horrible at editing code, though it lacks a lot of the must-haves of IDEs these days still (the lack of indexing means that a lot of things like refactoring and cross-file hyperlinking are a little way off yet).

But it’s possible to compile run-of-the-mill Hello World applications, as well as cross-compile to different architecture and different SDK and have the GCC errors hook up to the line in which the problem occurred, as well as using the built-in GDB debugger to step through code.

Here’s a screenshot of Mylyn in action on an Objective-C project (with and without Mylyn): 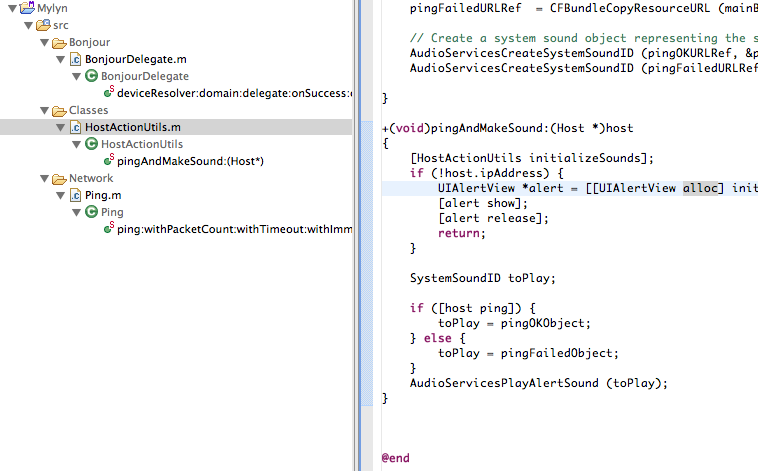 If you’d like to get involved, please start playing with it and giving feedback/ideas/code/coffee/donations to charity. Clearly, it’s not a replacement for Xcode, but it’s a starting point for developing Objective-C code in an Eclipse IDE.