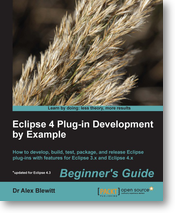 Last week was both the release of Eclipse Kepler and also my first published book: Eclipse 4 Plug-in Development by Example: Beginner’s Guide.

The book consists of a walk-through building several plug-ins, introducing SWT, JFace and Jobs. There’s a specific chapter that covers the changes introduced by the Eclipse 4 model, and how to write and use Eclipse 4 RCP based applications.

The book concludes with how to automatically test code using SWTBot, and how to build features and update sites with Tycho.

The book has been updated for the relatively recently released Tycho 0.18.0, as well as covering Eclipse Juno and Kepler.

There’s more details about the book on the publisher’s site, including a sample chapter to download. There’s an associated GitHub project which contains the code samples for the book.

I’d especially like to thank those in the Eclipse community who gave feedback on earlier drafts, especially Lars Vogel and Paul Webster; and of course Ann Ford, Thomas Fletcher and Jeff MAURY who spent significant amounts of time and effort going through the code samples to verify that they work as expected.