I’m pleased to annouce that Swift Essentials, Second Edition has now been published. This brings my first Swift book, published in December 2014, up to date with the latest version of Swift. 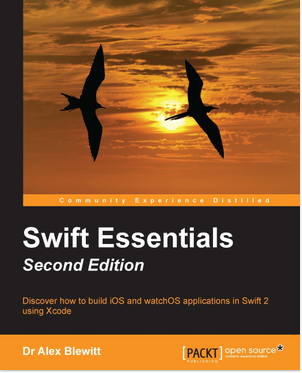 The second edition updates the book (and the book’s GitHub repository) to compliance with Swift 2.1, along with some future notes about what impact Swift 3 will have when it is released later this year.

As with the first book, there’s a free chapter available for download; this time, it’s the first chapter (Exploring Swift) that’s available.

The book is targetted at those developing on OSX since it uses the iOS libraries and Xcode for doing development; however, the first chapter (the free sample) is written to be useful for both Swift on OSX and Swift on Linux.

In addition, the second edition includes a newly written chapter on Apple Watch and shows how to include a GitHub browser directly running on the Watch using Swift.

The full table of contents:

Until 20th March, my book is available with 50% off the eBook price using SSEE50 and the printed book has a discount of 30% with SSEE30. See this link for more details.