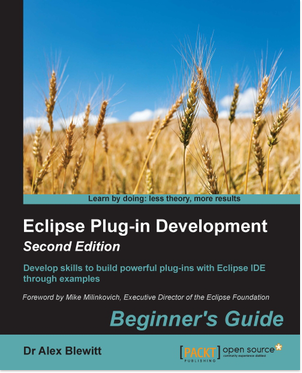 In July 2013 I wrote a book with Packt Publishing called “Eclipse 4 Plug-in Development by Example: Beginner’s Guide”. Apart from being a long title (and a fairly long book) it was the start of my getting involved with book writing.

Since then, I’ve written another book on Eclipse, and not one but two editions of Swift Essentials.

However, Eclipse has moved on in that time as well, not the least of which was Eclipse Neon’s release earlier this year. As well as the Eclipse 4 platform being more robust and functional than when Eclipse first switched over, it had the advantage that the platform became dependent upon Java 8 for its default run-time.

As a result, I’ve updated my first book to bring it up-to-date. I’ve gone through all the examples (still available on GitHub for both the first and second editions) and updated them to Java 8, as well as updating the Tycho support and the examples to bring them to the current state of the Eclipse 4 platform. I also added other requests from readers, such as showing how to use target platforms more efficiently and additional appendices on dynamic services with OSGi.

I’d especially like to thank Mike Milinkovich for writing the foreword for this edition!

The book is available from the PacktPub page as well as Amazon and other on-line retailers.

I’ll be bringing a couple of copies to give away at EclipseCon Europe in Ludwigsburg later this year, and I’m happy to autograph any books!

Thanks to everyone who helped make this happen.