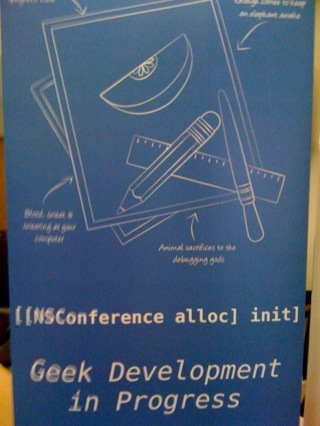 I’m at NSConference in Reading, UK this week. It’s related to the Mac Developer Network (organised by same people) and brings a host of famous Mac developers and technologists together.

First up was Mike Lee (@bmf), on Engineering Life. Rather than a technical focussed talk, it was more a call-to-arms to get out and appreciate life. Some touching moments but the basic summary is “Go out and make something of your life, so that your memes and achievements live on.” 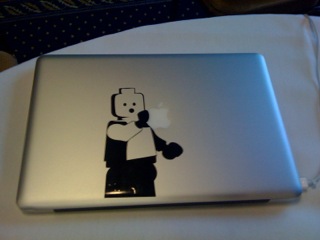 Jonathan “Wolf” Rentzsch (@rentzsch) stepped up to the plate to deliver a whirlwind tour of debugging tools available to Mac OS X. Several things I didn’t know about were commented on; so whilst I knew about gdb, I didn’t know that you could easily use the tab key to complete which process to connect to. Here’s a list of tools covered, along with their links:

Other tools and injectors 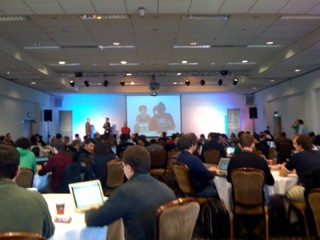 Dave Dribin (@DDribin) gave a talk on Clean Code, which offered the usual kind of advice; keep it short, use good names, methods should be 10-30 lines, classes should be 100-300 lines. Unfortunately, the code font – once dipping to 6pt – was completely illegible. So the advice was useful, even if the presentation wasn’t so much. He did link to WTFs per minute as an example of code quality, as well as an investigation into obfuscated code. There were a few useful takeaways; “Always check in code cleaner than before you touched it!” is a good summary of coding practice. 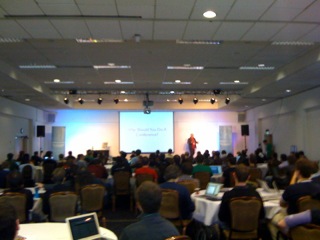 Drew McCormack (@drewmccormack) gave an interesting talk on data presentation on Mac platforms. As well as the obligatory Matrix reference, his talk started with different ways of showing the same data, with increasing clarity of the application. He segued into the different types of view in a traditional Mac application, including the fact that most views are in essence single-column table views (even CoverFlow). He then compared the difference between NSTableView and NSCollectionView; especially the performance of the UITableView. Lastly, he presented Core Plot, a Mac-like framework for drawing graphs and charts on both the Mac and the iPhone. (There is an internal PrivateFramework Graph Kit that is used by some applications, like Activity Monitor.) Although there hasn’t been a public release yet, there are a number of iPhone applications which integrate the library.

Finally, Marcus Zarra (@mzarra) talked about CoreAnimation. The basics of CABasicAnimation and CAKeyframeAnimation. A brief demo showed how quickly one could create a highly animated (if slightly gaudy) view, with scalable and smooth animation at either layer. In addition, the iPhone (and, presumably, the iPad) uses the same animation mechanisms under the covers.