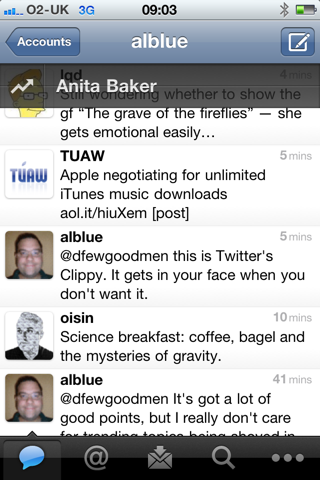 If you use Twitter on the iPhone (or other iDevices) then do not upgrade it when the app store shows an update available.

The new version has some nice features but it also has its own Microsoft Clippy in the form of the in-your-face “trending topics” which it puts in the form of a grey box at the top of the screen whenever you go back to the timeline.

Update: this phenomenon has become known as the #dickbar, inspired a failure of the #mobydickbar (to counter Twitter’s fail whale) as well as UIDickBar and JavaScript DickBar for implementing truly awful applications.

The only way to disable this feature is to roll back the app to a previous version, or to switch to a new Twitter client. Given the lack of ease with the former, the latter is a better solution.

Those not on iDevices should be wary of similar updates from Twitter Inc for their platform.