As many of you have no doubt by now read, Steve Jobs passed away on 5th October 2011. As a mark of respect, the landing page for Apple has been replaced with a simple iconic image. 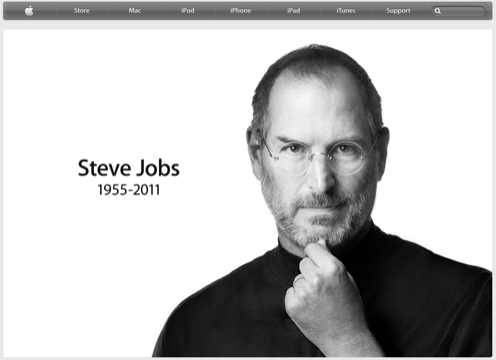 Steve has been in my technical career most of my adult life. The first computer I bought was a Nextstation pizza box, where I was introduced to Nextstep 3, and my first real coding language was Objective-C. (When Java came out, three years afterwards, being able to pick up object orientation was trivial since the ground work had already been done.) Although I was never an ‘original’ Apple user, I did move over and pick up my first PowerBook G4 running at a steaming 500MHz to run OSX 10.0, and I never looked back. These days, I’m still sitting in front of the same OS – with cosmetic changes, of course – and I’m carrying around an always-on device, running the same OS and far more powerful than my original Nextstation.

Back when Steve retired from Apple, it was clear that it was the beginning of the end. Although he kept going a couple of months, the downward slide had begun and his retirement didn’t last long. At least he lived long enough to see Tim Cook and friends launch the iPhone 4S, which would have been a distinctly different affair had events transpired the other way around.

However, we’re all going to die sometime. The point of life is to enjoy and achieve greatness in the brief period of time we have on this world. Without a doubt Steve changed the world for the better. (The original packaging of my Nextstation has the line “At NeXT we believe a few people can change the world”, and I know of no better tagline that can describe Steve’s outlook.) Quite apart from being a showman and lead presenter for Apple’s product announcements and presentations, his vision resulted in significant changes in the way that technical and entertainment industries operate today. Here are just some of them:

Back before PC was called PC, Apple arrived on the desktop computer scene. IBM PCs would later join in the fray, and eventually overtake them, but Apple stood out as part of that initial phase from home computers to work comptuers.

Five years before Linux 1.0 happened, Nextstep already had a fully featured operating system, and could play videos, record sound and embed objects. In comparison, Windows hadn’t even reached version 3 by the time of Nextstep’s debut.

Although it didn’t catch on commercially, the systems had high-quality defaults. Ethernet as standard, 24-bit colour, 16-bit sound, built in audio mic and speakers (and this in the day when SoundBlaster was a recently launched product rather than a generic API). True, it was overpriced for what it was – but the first version of HTTP was written on a NeXT box.

Bringing technology to the masses, rather than to the geeks. The all-in-one form factor of the iMac remains to this day (although the factor has shifted with the transition from CRTs to flat screens).

Aggressive phase-out of old technology and support of new technology

Floppy drives, PS/2 connectors (or ADB connectors) all went away with the advent of the iMac. USB and FireWire were their replacements, which still exist today. These days, with the MacBook Air even the DVD has gone, as has minor inconveniences like the removable battery.

Pixar significantly altered what was possible with the release of Toy Story, which wouldn’t have been possible without Renderman, a Nextstep based graphical animation tool. And of course, Steve’s involvement with Pixar helped it to go on to many further movies, including an involvement with Disney for mass adoption.

Every MP3 player is generically called an iPod, even if it’s not an Apple system. They weren’t the first (“No wireless. Less space than a nomad. Lame.”) but they did make it easy to get music on a portable device. The original one only had space for 1,000 songs – which most people rarely exceed their regular playlists in any case – but it went on to define a generation of devices. In particular, the success of the iPod led to the creation of the iTunes store and then, an opportunity for the music cartel to get a profit from buying songs instead of pirating them through the likes of Napster. Since then, Amazon have gone on to create a successful MP3 store and DRM has gradually been removed, but without Apple’s bargaining power with the media cartels this wouldn’t have happened.

Similar with music, although we’ve not seen as many copy-cat stores to date. But digital media consumption is clearly the path of the future and Apple is helping to lead the way.

Again, Apple wasn’t the first – the Sony P800 probably was, though it had a flip-over cover if you wanted ‘real buttons’ for calls and the like. As with other devices they were stylus rather than finger based. But when the iPhone launched (and was derided by competitors such as Nokia and RIM, who now are far back in the shadow) it changed the face of smart phones overnight. Instead of having hundreds of different models, all with slightly incompatible operating systems and bugs which were never fixed, Apple pioneered the device with a user-updatable OS and no carrier lock-in. Since then, all of the smart phones have been based on the original design of the iPhone.

The MacBook Air was the first tablet-esque computer, with solid state memory, a non-removable battery – although that still had a keyboard and a fully-featured operating system on board. (These days, the Air is the Pro without a DVD though it remains to be seen how long the DVD will last in the Pro line up.)

As if the Air wasn’t enough, the launch of the iPad – based on the iPhone (and iPod Touch) but with a bigger screen estate – again changed the tech world overnight. New tablet devices are always marketed as the ‘iPad killer’ in the same way that smart phones are always ‘iPhone killers’, but in truth, none has really come close.

It’s difficult to think of other ways that Steve changed the world. A less tangible, but still none the less important, is the focus on putting the user, rather than the computer, first. All of the Apple products are designed around making it easy for the end user to operate and use, regardless of the programming trickery or delays in getting it Just Right. Whole new conferences on UX exist, and many of them are inspired by Steve’s attention to detail and getting it right.

Whatever your personal thoughts are of Apple (and there’s usually those at each ends of the spectrum), Steve Jobs certainly caused a major impact over his lifetime and changed the destiny of millions, perhaps billions, of people. His legacy will live on. And, at the end, all of us would like to go knowing that we had made a positive difference on the world. 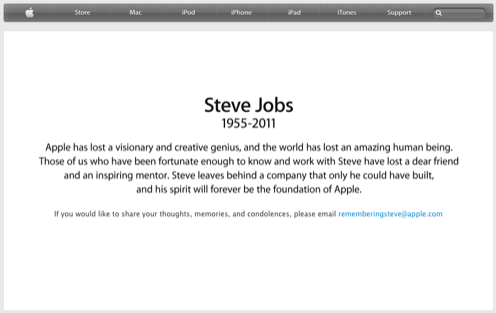