Not content with the death of Buzz, Google seems intent on killing of one of the only two products that I use. Today, upon logging into Google Reader, I discovered that the UI has completely fallen apart. From the welcome goodbye note:

Like many of Google’s products, Reader has gained a clean new look, with more space and less clutter, making it even faster to navigate your feeds.

As an example, on my Mactop I have 12 tweets showing. On Google Reader, with a window exactly the same size, I have four items showing. And each of those are two lines long, probably fitting into the size of a tweet (give or take). 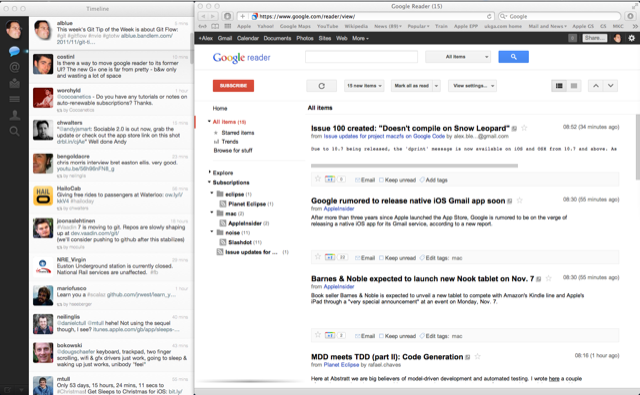 Yes, it’s nice that they’re finally standardising on a single Like button (and having all those Likes in one place makes sense, rather than spread around on an app-by-app basis) but let’s face it, Google fired the wrong UI team. Google+ has become synonymous with spam notifications and whilst there are three or four people I follow who regularly write many paragraphs (and let’s face it, some of them are Googlers themselves) all that happens is I essentially ignore any updates which aren’t on the home screen. The fact of the matter is that Google+ is text-heavy and information-light, whereas Twitter is the exact reverse.

Google+ to like the new unified look of the two. But Reader has just gone several steps backwards in usability thanks to a user interface which appears to be modelled on the East Coast’s current snowstorm whiteout, with just a few bits visible here and there.

Can anyone recommend a good Mac (or Windows) client for reading Google Reader and synchronising the read state across multiple devices? Or even a completely new reader UI from a different company? I’m not staying around for this UI disaster.