Wow, what a day yesterday was. From Mike’s entertaining keynote with a forward looking view of Eclipse (both as an IDE and also the wider foundation) to the release of Java 8 (and my InfoQ article), there haven’t been many EclipseCons that have kicked off with such gusto. And with the combined release of Java 8 support in Eclipse along with new releases from JetBrains’ IntelliJ 13.1 and NetBeans 8.0 on the same day, the whole Java 8 day has ben one to remember. For those that questioned whether or not Oracle would be a good steward for Java, this certainly answers the question YES – right down to Mark Reinhold’s list of community members who helped with the release. And as if that wasn’t enough, there were several new contributions to the Eclipse platform last night as a result of the Eclipse Hackathon – making it easy for people to contribute using powerful tools like Gerrit is an excellent way of growing the ecosystem, because today’s contributors are tomorrow’s committers.

By the way, Martin Lippert’s Flux demo is available on YouTube (under the older name of Project Flight) if there are people who you’d like to share the future with.

Today sees a track focussing on the Internet of Things in Grand Peninsula B; we’ve already past the point where there are more mobile phones than people on this planet, and it’s not going to be long before we have more (non-computer) devices per person as well. From yesterday’s excellent flying shark demo to the people counter (which has a video available on YouTube courtesy of Eclipse Live and Ian Skerrett), there’s a lot happening in the IoT space at Eclipse. Many of these systems are using MQTT to communicate and share data (if you want to find out more about MQTT, I have an interview with Andy Piper on the Paho project, which provides MQTT client side tools). There’s even a raspberry pi demo showing how it can be used to hook up with a TV, which sounds like a fascinating application (especially now Java 8 has a package specifically for Raspberry Pi’s hardfloat ABI).

The cloud does pop up in a few places in the schedule today; both Scout and Java developers have cloud-based talks, and there’s a follow-up to the Flux project after lunch in Grand Peninsula A if you wanted to find out more.

Personally I’m interested in finding out more about the “extreme” git branching for continuous delivery – more and more people I know are using Git as their deployment mechanism, and it’s baked in to tools like Docker (which is becoming a standard for launching containers custom tuned to particular applications) – and git will be at the heart of all this change.

Finally there are some traditional Eclipse/Java talks, such as the Eclipse tips and tricks after lunch, and the JDT lambda expressions talk at the end of the day. There will be information there for people both new and old, but by this time next year I expect we’ll be seeing a lot more lambda-isation of APIs (and if you missed yesterday’s talk by John Arthorn on Java 8 APIs, his slides are available as an HTML slideshow on GitHub).

If you didn’t manage to get to the EclipseCon hackathon, and you’re interested in learning how to contribute, then there’s another chance later tonight in Harbour, along with the other BoFs that are organised tonight. And there’s a Late Night sponsored by Atlassian – Angry Nerds to the rescue! 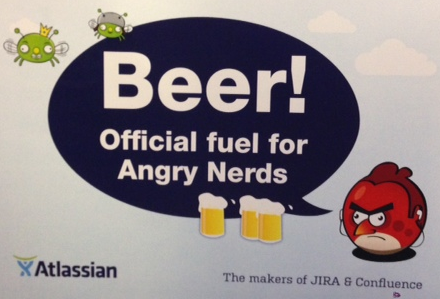