As I mentioned a couple of weeks ago, last week I gave a keynote at the OSGi Community Event. During the event I unveiled the Omega problem, which is the condition whereby projects are given inexplicable and unmemorable Greek letters, which unnecessarily interferes with getting started with OSGi.

However, that wasn’t he only focus of the event. I also highlighted 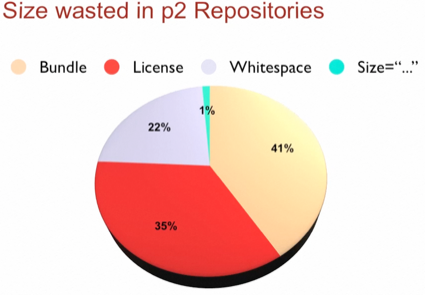 Of those files, the majority of the data is worthless. Approximately 35 of the content (or 60%) is appendix; present but entirely useless. Only 25 of the data contains useful information.

The problems can be boiled down to:

None of these are new problems; it was first reported back in September 2010 (and again in June 2011). So when you’re updating to Eclipse 3.7.1, the reason you have to download 700k is because of the way the update mechanism was designed.

The data was calculated by stripping the file of unnecessary whitespace (c.f. license/copyright, size), and recompressing the JAR file. Differences between the compressed (JAR) file sizes were reported in bytes. For comparison, the same content files were compressed with GZip to compare against corresponding JAR file waste, not shown above.

Help me OBR, you’re my only hope

The main reason for mentioning these limitations in p2 is the fact that OBR is due out as part of next year’s Enterprise OSGi release. It is my firm hope that these issues get fixed, and that the spec mandates decent compression (i.e. using GZip instead of JAR format) combined with mandating the generation of XML files without excessive whitespace.